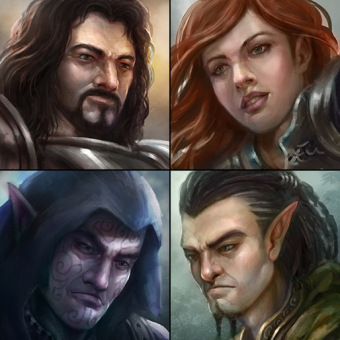 Ouch, ouch ! The week has been hard !

I did the Paladin specialization tree, but it took me longer than hoped, so I didn’t have time to finish the Priest ; I designed all his abilities & talents, but I implemented only 50% of them, and once all will be in the game, I’ll also have to test & tune them to be sure he has about the same efficiency than the Druid, else the game would get too hard or to easy depending of the specialization we choose for our healer.

Anyway right now I’m pretty happy with the Paladin ; it has been a bit hard to design him, as I was not sure where to go with him ; I ended with a classic setup for the Paladin : a mix between magic and melee combat, with a good hint of protection spells ; he got only very few healing abilities though, to avoid unbalancing too much the healing needs when there’s a Paladin in the party.

So next week, I’ll finish the Priest, and then hopefully do in full the last healer specialization : the Necromancer. This one will be really special, but I already noted tons of ideas, so his design is already nearly complete..!

Considering the current rate to create the specializations, I might put on hold the Rogue class. I’ll add it at a later point, once the game will be ready to release (ie: everything else will be finished & polished), or even in a free patch after game release, if the game is popular enough. It’ll depend on how much tiring & stressing the final rush will be in the incoming weeks.

PS: you didn’t get the reference of the title and you’re a fan of the Ultima RPG games ? Then head to the Ultima Retrospective Video Reviews , and watch them all starting by Ultima 0 (AKA Akalabeth) and ending with Ultima 9. You won’t regret it : it’s hilarious, it’s extremely well done and it’s a massive blast of nostalgia..!