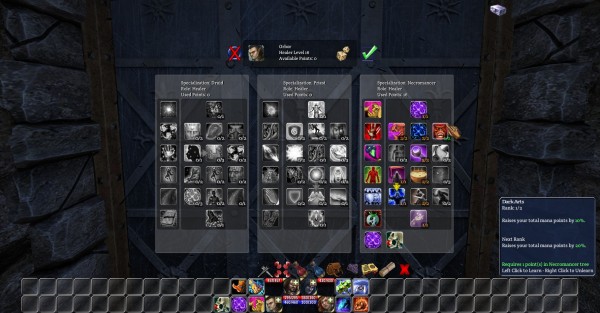 As planned, I finished the Priest specialization. The result is pretty nice, with a noticeable different style from the Druid specialization. It’ll probably make some fights harder and some other fights easier, as their capabilities differ a bit, but that was expectable.

Then, still as planned, I did in full the Necromancer specialization ! This one is a special beast : he actually bases some of his healing on damaging the enemies, so it gives a very different style from the 2 other healers. It can be a bit intimidating to handle him at 1st, but after a while, he can become very efficient. In bonus, every time you’ll get a new ability during the first levels, it’ll change the style of healing, which will give a good variety to the early game despite still having only a few available spells.

And I even had a bit of time to integrate a few missing weapons : maces, warhammer & practice sword. I still have some other swords to put in the game, as well as all the matching icons for the inventory.

So now, there are 2 specializations for the mage left to be done. 1st one will be a warlock, based on DOT. 2nd one will be, hum… I’m still not sure !

It might be an arcane mage, somewhat similar to the one from WoW, but we’ll see how he comes out. So this new week, I’ll be doing the warlock, hopefully in full, so I could also do a good part of the last mage specialization.

See you in 1 week for the next report !