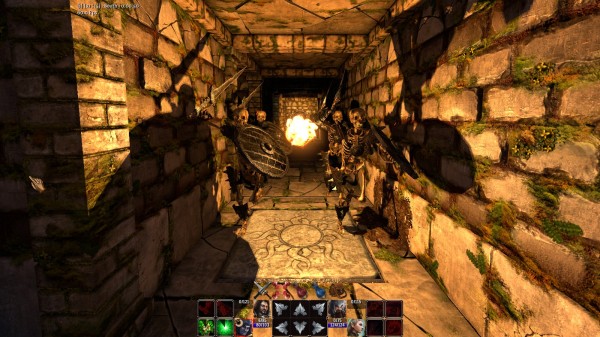 After a lot of thinking, chatting with people liking the game and a few ones not liking the game, I’m finally able to understand what’s right and wrong in Dungeon Guardians in terms of gameplay.

So in short, almost nothing is wrong.

Like already hinted in my Review of Reviews, people not liking the game and vocal about it are usually just mighty idiots (with a few exceptions).

But let’s put them aside for a while and check what people who liked the game had to said about its shortcomings :

Add that’s all for the shortcomings..! When browsing positive reviews on the Steam Store page of the game, most players have none or very few complaints about the game.

But the game has only a 83% positive rating ; ok, it’s really not bad, but when you read the positive reviews, you might wonder why it’s not higher.

Let’s do a quick recap of the strong points of the game (still from the positive reviews, but also from comments in the forum and reviews from specialists) :

So now, let’s have a look at our bunch of idiots, why don’t they like the game if it’s so awesome ?

First, let’s put aside 2 categories of players who don’t like the game but are not idiots :

Actually, I have only a grudge with about 2 third of the players who post negative reviews on Steam (ie: “Not Recommended”).

So now let’s examine the different reasons given by the simpletons to justify their negative reviews on Steam. There are actually only a couple dozen of them out of thousands and thousands of sales, but I have to let off some steam and I think it’s actually interesting to see this process and see what we can learn from it :

So what can we learn from all this ? Is there some possible fix to avoid the negative reviews they leave on the game ? Is there anything to do so some of them could actually enjoy Dungeon Guardians ?

The short answer is a double-no.

As you may have noticed, a good bunch of these players do not read the game description, nor check the game videos & screenshots, or just ignore them, and even don’t check (or believe ?) the existing negative reviews before buying the game.

Moreover, they seem to seldom check the game options, and thus adding stuff especially for them seem to have little to no effect, as they are either not aware the options are there, or refuse to use them.

So why so much idiots ?

Dungeon Guardians attract them more than other games because visually it looks like other 1st person view Dungeon Crawlers, and all have more or less the same gameplay. Bringing something really different ought to make some people unhappy (especially if they don’t read the game description).

Moreover, the Threat & Aggro concepts are pretty abstract, which means some players are going to be intellectually challenged to understand what’s going on. Some will like that, some others will just lower the difficulty setting and enjoy the exploration and the explosions, and some others will hate the game for showing them their limits.

Personally, I’m always very pissed-off every time I get a negative review (as you may have guessed by now

). Most of times, I find them unfair, superficial and just plain idiotic. But I guess it’s the price to pay to make something different, unique and relatively smart.

Note : I have the same issue with my tennis game, but to a lesser extent as it’s really outdated visually, so most idiots are repulsed at 1st sight.

Based on my 2 games on Steam, my advice to my fellow experienced Indie developers is to mostly ignore negative reviews ; most brings little to nothing. Instead be very attentive to people who like your game but outline its shortcomings ; these ones will be very pleased to see you improving your game from their comments, while the unhappy ones will never acknowledge any amelioration.

Although, in case you’re very inexperienced and actually create a less-than-good game, check the negative reviews, you may still have a few things to learn from them…

PS: From all the questions and issues exposed from the refund notes, the reviews and the comments in the Forum, I created a FAQ for the game. It’s still too early to know if it’ll help with the negative reviews, but it might lower the rate of questions in the Steam Forum…

Of course, some people were a bit shocked by this post, and likely rightful so. Although, I think I’d rather be honest, even if a bit borderline, and show you what the average Indie developer feels & thinks (I have discussed this kind of issue with other Steam developers, and hum, let’s say I’m not alone in that case

However, since last September, I have been lead to chat with several new negative reviewers, including some who had posted what I consider some harsh and unfair reviews. And it turned out that when engaged decently, they were almost all nice people, or at least nice enough.

(although many negative reviewers never answer me, so I can’t vouch for all of them

So I’d like to redefine a bit what I meant by idiot by starting to say that I could easily include myself in that league, if I didn’t know that posting hasted, superficial & venting negative reviews was actually hurting other human beings.

The thing is lately I have less time to play (I became a daddy 1 year ago), and often when I play a game now, I want it to be awesome, and right away like I expect it to be, and don’t want to dig too much if it’s not. And when it’s not, I might get rather frustrated. I guess it might be what happens with many of the negative reviewers of my games, as they can get rather tough to get into.

Thus said, I still wish that some of these players would ask for my help and check the options I designed for them, rather than post a negative review and never touch the game again…