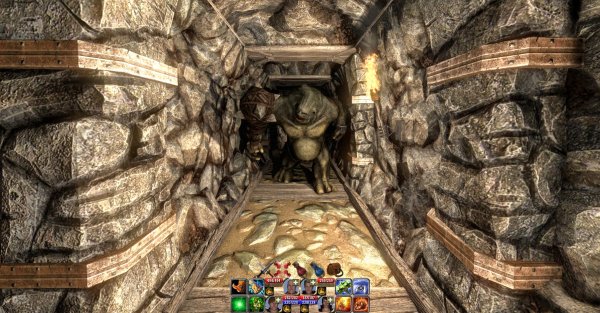 Pffff, again, I had trouble to work this week !

Moreover, the Level 10 design turned out harder to handle than what I had expected. So the week ends with only 1 new level, but the result is at least satisfying !

Let me explain in details. It all starts with the initial game design I made when I began to work on Dungeon Guardians. I didn’t want the players to pick up torches to light their environment, unlike many other First Person Dungeon Crawler. The reason is simple : if we spend the whole game holding a torch, the lighting is more or less identical for the whole game. So by not allowing the player to pick up torches nor lanterns, I control better the atmosphere and its variation through the whole dungeon. It also allows to build more beautiful and impressive scenes.

But there’s an advantage to holding torches : it drastically limits the distance we can see (if there’s no other lighting source), and it feels slightly oppressing to know we could run out of light and end up all lost in the dark if we’re not careful. So I decided to make 1 level that would feature these perks. But I still didn’t want to provide torches : it’s not really possible to predict how many the players would need, as each player progresses at their own pace, so I’d have to put a ton of them, and then the fastest players would end with extra torches to use in the following levels. I didn’t want to do that for the last level either, as I wanted to bring variation earlier in the game. So I had the idea to create the light field : when you walk into it, you get a light spell on your party for 8 minutes. Like this, you get all the advantages without the inconveniences.

So I did all that, and boom, I got the confirmation of my initial choice : constant lighting really doesn’t look that great ! So I had to do some more thinking…

Mainly, I managed to get some better shadowing, so the contrast on screen is better, and the dancing shadows bring some life when we move ; the light from spell slowly pulses so the lighting isn’t totally constant ; and I put a bunch of blue crystals in the caverns so it brings contrasts, while still making the light spell needed, as the crystal light is very dim. 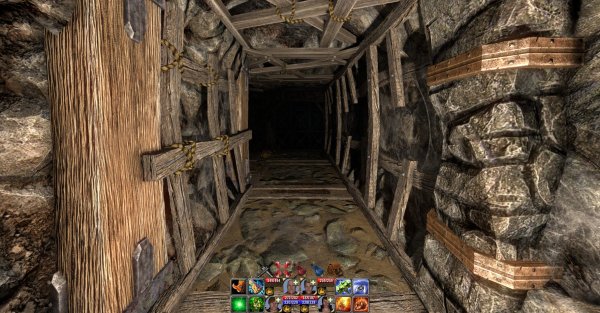 Otherwise, that Level 10 contains the most challenging labyrinth so far, and I probably won’t make anything harder in the game. Even with the map, it might prove difficult not to get lost, as there are some up/down tunnels. For fierce explorers, it might be a nice challenge, but for more casual players, it might feel a bit too hard, so I have hidden a map at the start of the level. If anyone has trouble exploring it, I’ll give them the location of the map and it’ll get much more bearable…

That’s all for this week ! Next week, the objective is to do only 1 new level, as I’ll have to spend a couple of days on my tennis game to do a small update.