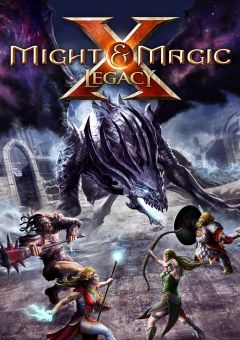 I just realized I didn’t tell why I was doing these game analyses !

Mainly, it’s to put down my ideas about other First Person View Dungeon Crawler games, which helps to situate Dungeon Guardians with its similitudes and differences. I think it’s also interesting to see that even with a common base, these games can feel very different depending of what could feel like small game design choices, but actually lead to noticeably different gameplay.

This time, we’re checking Might and Magic X Legacy, released just a bit short of 1 year ago. Might and Magic is a cult Dungeon Crawler series, which got its up and down. The down mostly came after the 7th episode (which was already seriously less good than the 6th).

Unlike Dungeon Master (DM) and Legend of Grimrock (LoG), it’s not real-time but turn based. The good point is that it lets you play at your own pace. The down point is that it creates less tension than real time fight and it feels less dynamic. Both can also be seen as advantageous when you just want to relax (although even in turn based game you still can feel pressurized from time to time !

But there’s also another major difference : M&MX, just like its ancestors, doesn’t feature an unique deep dungeon ; instead, it offers you an open world with numerous small dungeons and a few medium ones.

From these 2 characteristics, it means there’s no dungeon offering any memorable nor challenging exploration. Once in a dungeon, you’ll never feel lost, and except for a very few exceptions, you won’t even feel confused about what to do or where to go, especially as there’s no puzzle (with a couple of exceptions) and the secrets appear depending of your party abilities and not of your own observation skills. And all that without taking account of the automap.

On another hand, exploring the outside world is more engaging. And the where-to-go challenge comes up when you have to decide what is the next dungeon you want to go. As there’s no level indicator, it means you can end up in a too hard dungeon. This raises another issue:  you can’t play without quick save & load, as it’s impossible to escape a started combat, which is for me a mood killer.

But it’s not that bad, because of another bad point : the game is quickly too easy, which means you’ll rarely have to worry about getting in a too hard fight (if you play in the normal difficulty).

This brings us to the combat system. So it’s turn based. You need 1 or 1 and half healers (because often 1 healer can be paralyzed/asleep/stoned/etc…), and although there’s tank build, there’s no tanking in the way of World of Warcraft (and Dungeon Guardians

) : there’s no aggro building. You still have a few “attack me during this turn” spells, but most bosses are immune to them, so actually the tank doesn’t need to have much more HP and armor than other party members. 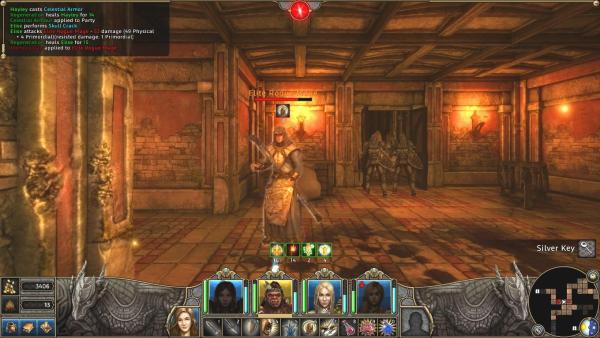 Might and Magic X Legacy – In one of the 1st Dungeons

The combats themselves, once you have digested & understood the numerous abilities, are actually simple, easy and mostly straightforward. No, in M&MX, the difficulty comes from the resource management. This means that the difficulty comes from the choice of using or not HP & Mana potions during the fights. Almost no fight can be fatal as long as you have enough potions to go through it. This is even more true as it’s a turn based game, so you have all the time in the world to analyse the current situation and choose the most pertinent ability correctly. So to sail through the game, you just have to understand how much potions you can use in each fight. The number of potions is limited ; you can buy some from shops, but it seems they don’t reappear afterward. But you can also buy limitless rations, that allows you to sleep after the fights to recover all your HP & Mana.

As 1st, you’re short on gold, but after a while, you’ll get a ton of it. So the difficulty comes from resource management, but you get more or less limitless of them after a while ? So yup, there’s not much difficulty anymore after 25% of the game done.

There’s an hard mode, but this one is just too hard to newcomers ; you’re expected to already know the game to pick it (although you aren’t told so in the selection screen), but once you know the game, it is also too easy as you just know how much potions & rations you need to go through the dungeons & world. Plus, still, after a while you just get a ton of money again.

The combats aren’t really boring nor too repetitive, though. There are enough abilities, effect variations, kind of mobs, and special events to keep things interesting. It’s just that without time pressure, there’s not much doubt about what to do, nor doing it quickly enough.

So that’s a bit a pity as the game itself is pretty nice. Discovering & exploring the world and its dungeons is captivating. The character levelling is nicely done (but not great). There’s a ton to do and see, even though the story holds very little interest, which is a bit annoying in a game with such a big world : it builds very little implication in the player, roaming all around, jumping from dungeon to dungeon without caring much about the goals. Ending is nice enough though, as the background of the story is well exploited.

There also are a bunch of riddles in the world, and a few dungeons made of only 1 puzzle to solve and nothing else, plus 1 dungeon made of several puzzles but without any mobs nor real exploration. Puzzles were mostly annoying for me, and I guess riddles are decent if you’re into that kind of thing.

Visually, it’s shockingly ugly at 1st ; the 1st city is painfully horrible and technically it feels like we’re back in the early 2000’s. Following cities aren’t much better, but the world and the dungeons are usually well done with a good artistic direction.

So in short it gives : interesting combat system plagued by its easiness after a while, simplistic dungeon exploration partly compensated by open world exploration, average puzzles, unequal visuals & atmosphere.

So all in all, this is a game that is bigger than the sums of its parts and offers a nice adventure, despite all its shortcomings.