topspinbackhand,
yes, I planned to look into all that, except for the 3) so I'll have to check that.

Sekir,
does it really move ? Or it's just the lighting that changes ? If the lighting, it's "normal" : it's because of an optimization and I'm not sure how to make it better...

topspinbackhand wrote:So I've been playing TE4 on and off for about a year and a half now, when it still had TEM2's graphics and TE2013's menu (how times have changed

1) The Topspin skill is still not where I'd like it to be. Unless you are playing as a Defender style, heavy topspin shots are quite easy for the opponent to attack with shoulder height accelerations on the forehand, some of which can reach 110 mph/177 km! Balls that are short and high bouncing are essentially free points for the player attacking them. Due to the way that shoulder height accelerations are implemented, I beat players with a high topspin character by just attacking their backhand all the time and never going to their forehand, which is just far too dangerous, even if their backhand has better stats.

4) When serve/volleying, I still see my character often hitting groundstrokes when trying to volley a low shot, rather than a low or half volley. This almost always leads to an error. I'm pretty sure this is a bug, especially since you've added those nice half/low-volley animations.

Otherwise, great job Manu. It's impressive to see what a dedicated person can do on a budget. Even in its alpha state TE4 is far better than any big budget tennis game released in the last decade. Keep up the good work! I'm looking forward to the programmable AI and tournament mode when that arrives.

Great review. I agree, i think both Top spin strikes and Normal strikes should be more usefull specially Normal strike should have more speed it's looks really slow.
I notice one thing. My normal forehand strike is usually between 110 to 121 most of the time 115-118.
Even with my Backhand normal strike i had almost same numbers i hit between 115-120 many times, so often. But also sometimes hit lower than that.

I think there should be difference between Forehand and Backhand in Normal strikes. Forehand should get more speed. Top spin strike is not so efficient too.

Little suggestion i do think TE4 is more easy for attackers if gameplay doesn't change much maybe add 1 accelartion shot to defender instead of -1 so became neutral
And i do think Bulldog play style should get lower handicap instead of bit lower on top spin strikes speed and length, like defender.
Just a suggestion.
Or maybe not much but few more usefull talent to add looks too less talent they don't effect much maybe just serve talents.

I think play styles are fair but like i said strikes is not so usefull top spin and normal strikes.

Bro the game looks improved, but graphics could be better and animations look clunky at this point, hope its just early build

I just wanted to say that the update yesterday made a big difference for the animations/strike adjustments. I'm not seeing the weird bending anymore and strikes on the stretch look much better. Thanks for all your hard work!

I just wanted to say that the update yesterday made a big difference for the animations/strike adjustments. I'm not seeing the weird bending anymore and strikes on the stretch look much better. Thanks for all your hard work!

I still have this issue.. strange

Is there a way to decrease the maximum or average shot speed ? The rallies seem a bit fast paced.

tennisfreak12,
graphics won't change : I don't have a multi-million $ budget...

Note : this topic is for comments (and questions) about new stuff in the Early version, not about Modding it, or general questions about the game.
If you're not sure if it's related, then just create a new topic.
ManuTOO
== Mana Games ==
>> I don't answer Private Message, except if it's really a _Private_ topic <<

@manutoo, the main issue right now, is the animation clunkiness. they seem unnatural and out of line slightly. perhaps its because of the graphics leap. otherwise everything awesome. add to that the modding community. a mouth-watering prospect, plus the new features awesome! will be pre-ordering soon.


Plus can you tell me the graphics specs needed to play the game without a hitch?

tennisfreak12,
I feel the animations look a bit more rigid than in TE2013 although they are nearly identical ; I guess it's because the 3D players are better shaped and look less like a tank and thus it outlines the lack of motion capture on the anims, or maybe because the rigging is not optimal... (or a bit of both)

However, you need to be well-positioned to have the best looking anims, which is a big change from TE2013 : like this, the anim looking gives a gameplay feedback.

it's really nice to see how TE4 is progressing week for week. Are you planing to update the linux version anytime soon? It's been a pretty long time since the last update.

topspinbackhand wrote:So I've been playing TE4 on and off for about a year and a half now

TE4 has been available for a year and a half? I thought the early version was just released. Or are you rereferring to the TE series in general?

saknl,
I just updated the Linux version as it was hopefully a good time to so (ie: some nice improvements and not too many bugs, while the next noticeable improvements may need a few weeks to come).

John Hackenroe,
the Prototype was released in August 2019 and the Alpha version in December 2019. You can check the Mini-Dev Blog here telling the whole (slow) story : topic15-31541.php ...

manutoo wrote:saknl,
I just updated the Linux version as it was hopefully a good time to so (ie: some nice improvements and not too many bugs, while the next noticeable improvements may need a few weeks to come).

From what I've found on the forums, the "Short Term Form" is something that lowers during a match and never recovers during that same match (only replenishing for the next match)? And if the Short Term Form drops below the little triangle, then the Energy bar gets a lowered maximum as well (i.e. no longer replenishes completely)? 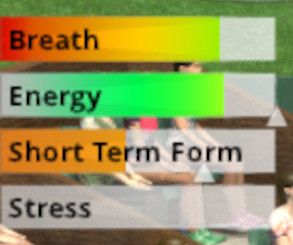 Wouldn't it be interesting in this case if the little triangle under the Energy bar started moving to the left to indicate what the "max" Energy level is once the Short Term Form dropped below the threshold?
Now it's always at 100%, where it's relatively useless. It would be interesting to know, once I'm tiring my opponent, what his maximum remaining Energy is...

TimovieMan,
I just changed that so in the next version that little triangle will show the max possible energy level.