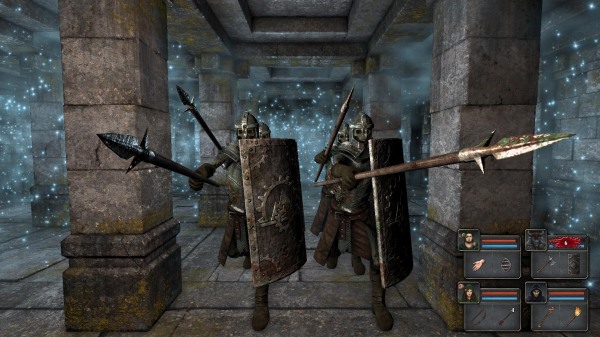 If you haven’t read the Game Design Analysis of Dungeon Master ,  you might want to get a look at it before reading this one.

Legend of Grimrock (LoG) was released almost 3 years ago and brought the grid-based movement & first person view Dungeon crawling back in the spotlights. Its sequel has been recently released.

LoG has often been presented as a homage or even a remake of Dungeon Master (DM). Its main gameplay strong point is its puzzles. There are a good bunch of them, very evolved and clever. But as I wrote in my DM analysis, DM wasn’t really puzzle based. Moreover, the dungeon exploration is a lot more straightforward than DM ; it features a more linear and less mystified progression which requires none or only very little backtracking or roaming (except for 2 or 3 levels) ; the whole progress is made even easier by the auto-map system. And as LoG’s modern 3D engine lets  you see more than 3 squares away, you almost never feel lost for the whole game.

Another weak point is its combat system. It’s very simple and basically requires you to strafe-turn-strafe-turn non-stop while waiting for your attack cooldowns to reset. Even worse, if you have mages in your party, you have to enter complex rune sequences while you’re strafing & turning. It’s like that for hours till you beat the game. If you don’t strafe & turn around, the monsters will kill you very quickly.

Presented like that, it seems to be very close of DM, but actually, DM’s combat was better :

Anyway, personally, I think this kind of system is really outdated, and today it’s possible to create more engaging & less repetitive combat systems, either by going in a more arcade direction, or a more tactical one (like Dungeon Guardians

Another weak point is the story and its background. There’s not much going on there. But in the dungeon crawler genre, it’s not really penalizing.

But there’s a last severe weakness : the ending level(s). Without spoiling much, let’s say it felt out of place, rushed, and not satisfying for the gamer (ie: no real sense of achievement).

And still, LoG is a good game (great some people might say if they didn’t get bored by the combats). Mostly because except its puzzles, it has another very strong point : a great atmosphere, brought by a finely mastered artistic direction. So globally, we still get a good adventure in an oppressing dungeon.

Note : just to make things clear, I’m not here to bash LoG ; I just wanted to analyse its strong & weak points, to see how it’d possible to make an even better game..!

Ok, now that analysis is done, I’ll be able to try LoG2 ! From what I read, it seems to be still heavily puzzles based (which is not my cup of tea) with only a few enhancements on the combat system, so I’m afraid it may still get boring after a while. I’ll likely write my analysis about all that in a few weeks…

One thought on “Game Design Analysis : Legend of Grimrock”