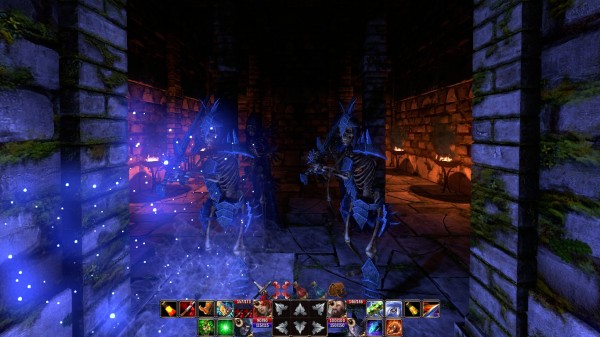 Xmas in a Haunted Dungeon ? (screenshot by Hellbishop)

Exactly 1 year ago, I wrote the 1st post of this blog.

Development had started more than 2 years before that, but that post can be seen as the limit between “I’m doing that to enjoy myself” and “I’m going to have to sell this game if I want to do more like this ; and to do so, I have to finish it”.

After that post, I almost never stopped to hurry, or at least feel impatient to finish the part I was working on to switch ASAP on the next one, hoping to finish the game soon.

Now, the game is released, but it’s still a bit early to do a real Post Mortem, especially as I’m still not sure where we are headed in term of sale volume.

So let’s talk about past week.

Work rhythm finally noticeably slowed down : most of the days, I had free time between end of my work and going to sleep !

I finally fixed the Linux input issue (by doing my own version of the text input), but I still didn’t start to work on the modding stuff. It should be very likely for this week, as the bug reports & the feature requests start to dry down…

I still didn’t hear back from GOG. I’m not sure if it means they’re not interested, or if they are crawling under the game submissions, or if they are just very busy with the end of year business. Hopefully, I’ll know soon enough.