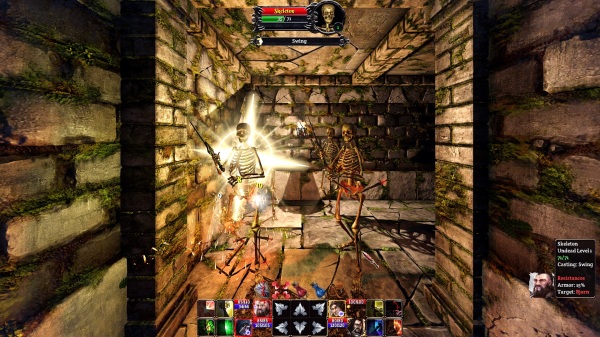 Pally vs Skeleton (thanks to Agent Cooper for this nice screenshot!)

I still worked a lot last week, but less frenetically (at least since last weekly update) and got some well deserved sleep, but probably still not enough rest, because I spent a lot of time watching Let’s Play videos on Youtube.

These videos shown me that a lot of players don’t want to spend 2 minutes to read in detail the description of their abilities, and thus just smash the buttons without much idea of how to organize their fight. Game is forgiving at start, but the difficulty quickly raises up so I wonder if they’ll make it to the level 5 or not.

Except that, Dungeon Guardians should arrive soon on the Humble Store (but still through Steam Keys), and I contacted GOG but still haven’t got any answer from them.

So next step is to put the game on the Mac AppStore, but before that, I’d like to add the Modding support to allow adding custom portraits.

And even before that, I have to create my own text input field for the Linux version, because my attempts at bypassing the Unity3D bug seem to have failed…