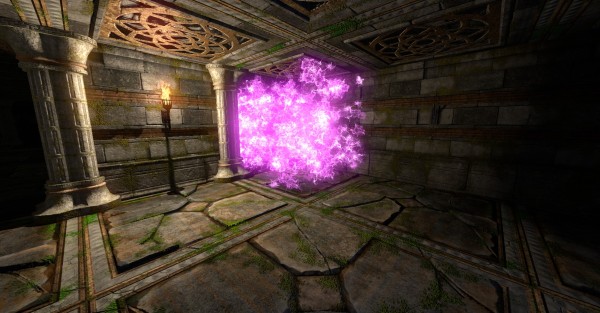 I did start to test the whole dungeon..!

But I did only 7 levels, and only barely as there’s still a little bit more to test in the Level 7.

Why only 7 ? Because I got a tons of little bugs & other stuff to fix and tune. I also improved a few things, like the Force Field effect shown in the screenshot above, or adding an indicator when an enemy interrupts one of our Toons ability, or adding another indicator to show when we’re attacked from sides or the back (which is quite helpful when there are several groups of enemies around our group).

I improved the average dps stat info so now it includes Hit Chance, Critical Chance, Expertise and Haste, which is very helpful to decide what enchantments to favor on your gears. In the same idea, the tooltip to compare 2H-handed weapons take into account the current gear equipped in the off-hand, which makes much easier to decide which set-up is the best.

I also fixed some complex bug about delaying mechanism actions, tuned the skills system so the Stamina skill gets a bit more interesting for spell caster classes, and so on.

The result is that now the game feels much more consistent and near release state ! Visually, it looks really nice, so I might finally be able to do a video (sound FX are still seriously lacking & GUI still needs serious visual improvement, but we’ll get there!

Hopefully, it won’t have much bugs left now and I’ll be able to finish to Beta test the Dungeon by the end of the week. Although I’ll have to switch back to Steam & my tennis game soon so I may not have the time to finish the Beta 3 this week…

Let’s see next week how all that will have turned out !