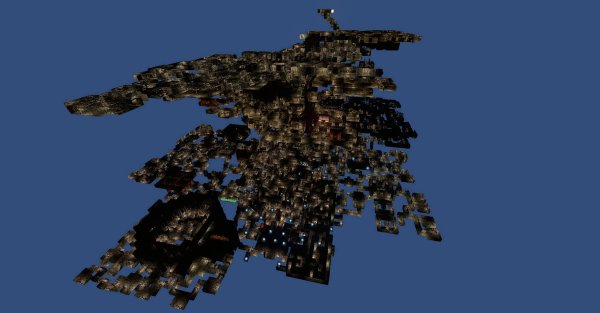 Updating the project to Unity 5 has been pretty quick, but there was a severe hiccup.

I hoped to switch to the new Physically Based Rendering (PBR) ; this kind of rendering produces very realistic lighting and it can be really nice. But unfortunately, there’s no automated process to convert from the classic rendering to this new one, and moreover usually it needs assets created especially for it, else it’s not really physically correct anyway. So PBR may come only for DG2.

So I kept the old lighting system. It’s not bad and it can be prettier than real life, as it kinda amplifies the reflections…

But at least, upgrading to Unity 5 let me load the whole dungeon at once and do the screenshots you can see all around this post ! That gives a pretty impressive mess, no ?

And although I couldn’t remove the Loading screen, now the loading time for the 20 levels is shorter than the time it needed before to load only the 8 levels of the Beta 2, as it’s under 15 seconds, which is really acceptable.

I spent the end of the week upgrading my selling system, as I had to do some changes after the release of my tennis game on Steam and the brutal change in Euro exchange rates since the beginning of the year.

Next week, I’ll have also plenty of little things to do that are totally unrelated to Dungeon Guardians, but hopefully I’ll get back to it before the end of the week. I might either start the final boss fight, or do some small improvements & changes from Beta tester feedback.