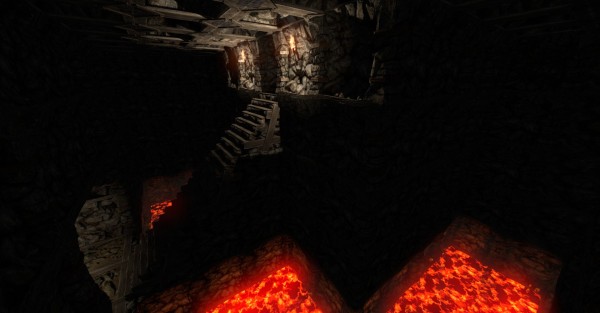 I did everything planned last week !

Or almost… Ok, I cheated a bit, I finished this morning before to write this post…

So I finished the Level 13 : just by adding a puzzle, the loot and some secrets, its soul came to life ! Now, it feels much more right than last week, and I’m more happy with the result : it’s a classic level, but still a good level. Especially as it features the best puzzle of the game so far ! I’m really happy with this one ; it’s actually not that hard to solve it, but it requires to really observe and not rush things, so it looks very intriguing at 1st, feeling like a timed based puzzle, but actually it’s just an observation one.

After that I created the Level 14 ; it’s a relatively classic one as well, but with a bunch of elements, architectural & gameplay ones, that make it unique. For the puzzle, I recycled the one from the Level 13 but transformed it to be a timed one ; like that, people who would have thought the Level 13’s puzzle was time based and spent a lot of time to try to solve it in that way will be able to use that training to easily solve the puzzle in the level 14.

And finally, I created the Level 15 ; this one feels special enough as well, featuring some lava (as seen on the screenshot above), it makes me feel like a level from Doom1. It’s also less linear and globally pretty efficient. I also broke a few of my habits so it brings some variety. And its puzzle is good ; it’s dexterity based but nothing too hard.

And on top of that, I managed the release of my tennis game on Steam, which was kinda erratic, so all in all it has been a pretty busy & intense week !

The good news is that now I create levels much faster than before… More exactly, I create them in less cumulated time… I still need a couple of days to create a level, but I don’t have to work as much every day, so it gave me time to take care of Steam & stuff.

So the objective for this incoming week is to create the Level 16 which will be the last level of 4th tier (actually, it’ll belong as much to the 4th as the 5th), and then set up the 4 boss fights of the 4th tier. I’m not sure I’ll be able to do all that, except if I come pretty fast with ideas for the boss fights, or decide to do more simple tank & spank fights, but we’ll see in next weekly update the results, like usually !