General suggestions & my answer to them moved there => viewtopic.php?p=271466#p271466 . (this current topic is more for on-going stuff with the Alpha

The forehand side of the crouch animation is looking quite awkard, the backhand side can still be passed on. The game seems to be more balanced now with winners & errors. You cannot spam the accelaration like before.
Last edited by noys390 on 06 Sep 2020, 13:58, edited 1 time in total.

Game doesnt keep settings and everytime i reload the game it gets the default resolution etc. Also, when i plug in my ps4 dualshock, game go crazy and buttons are pressed by themselves automatically

The new animation system is cool to see - not perfect yet obviously, but you see some really nice moments that show the potential especially on volleys

A bug I noticed - when the ball deflects off the edge of a player's racquet, the game awards it as a winner for their opponent. The "winner speed" pop-up appears when it wasn't a clean winner. I can try to capture a video of this next time if necessary.

noys390,
I checked and tune a bit the lowering of the body on low ball on the FH side, but I think the main issue is when the player is running a bit forward. There there's a mix between the 2 animations and there's not much I could do to improve the transition when the player has to hit a low ball...

For your PS4 controller, I have no idea, though. My XBox controller works fine.

Rob92,
1) I'll need help to determine what is too silly looking and what is not, as it's subjective. For me, it's like 95% ok now because I think it's much more important to see the ball in the racket, but some stuff might require some heavy tuning to please more people.

2) Actually it wasn't exactly a bug as it was working like designed for TE2013 ; but now with the separation of errors into Forced & Unforced, it is indeed better to categorize these strikes as Forced Errors.

Hi,
The overall feel is greater simulation, the ball is now even more "independent" and has a life of its own. Strike each ball to the other side is quite a challenge, even from a seemingly easy position. This is a big +, the errors looks reality.
Now it's harder, more possibilities to strike and gameplay is more "strategic", it is not enough to press A + B from almost every position.
The whole gameplay looks better with the new animation system and stimulates the imagination of the final effect. Some ralies looks really good.
I think that if I improve the animation of the players moving around the court (devoting the footwork) it will be fantastic.

I wish the editor had an option to set the leg length to body ratio of player. I think they are a bit too short now.

The clay court looks so much better now!

I checked your last update and i noticed few bugs, first of all, bug on ball rebound before serve, secondly physic bug raquett penetration after the shot and thirdly, i m playing real tennis 15/4 level and for me it's too simulation now to accelerate the ball or to recover it with slice fh and bh, the ball is very slowly.or missed.
don't forget pc player who play with arrow on keyboard

Hi Manu! So I've tried out the latest build for a while now and I have some comments:

-I still have that annoying bug where the player automatically moves to the left, it's driving me mad because I really want to play more. Setting the controller dead zone to 0.65 seemed to have fixed it previously but it's back to how it was before.

-I encountered a bug where I can't pause the game. Don't really know what is causing it but it did happen after I alt tabbed out of the game, if that's any help. Then I went back to the main menu and the screen kept going back to the previous one after I pressed a button. I had to exit the game to stop it.

Regarding the new animations:

- I really liked the one where you reach for a high ball, that one seems mostly on point

- I also liked how they reach for a cornered ball and bending the knees when running across the court
- The knee bending animation didn't look great in all cases though, but I guess that you'll have to keep fine tuning it until it's perfect. Sometimes the knees would bend strangely for a really low ball and that looked kinda off
- Volleys look really good! The reaching animation for a smash also looks cool but might need a bit of fine tuning
- This happened only once but I think it's worth mentioning: the forehand animation didn't play correctly and the player did it after hitting the ball
- I set autopositioning to the lowest but my player always corrected his positioning to hit a slice shot dead in the center of the racket. This only happened when hitting slices so maybe it was a choice you made. I did hit bad shots when out of position and not slicing
- I saw a forehand slice return which looked amazing. It was kind of a "safe" shot and looked like the one real players use when returning really fast serves. Is that a new animation or was that in the game before? Maybe I'm dreaming

I agree with some of the comments in this thread. Some animations will definitely need tuning and I'd die to see some improvements regarding footwork, as that's the only aspect where the game is lacking, especially when moving backwards.

About the game looking "silly", I can't really decide yet. Obviously gameplay should be top priority but I guess I'd rather not have those weird animations. I think making it look more realistic will make it better for the ones who are already playing the game and surely attract more people, but you'll know more about that than any of us. I understand you'd have to make compromises to make it work and that it could be really difficult so we'll understand whichever path you decide to go down on.

Sorry if this comment sounds mostly negative, I've already talked a lot about the things I love from TE. All in all, I think this update really brings another great element to an already great game and I believe these small details will turn it into the ultimate tennis simulator. Cheers!

noname1988,
1) I hope someday to get new movement anims. Hopefully next year.

2) It might be quite complicated to change the player leg length, especially to make it configurable (because of the animations).

3) I'm glad you have noticed the change in the clay texture ! I hadn't seen it in a while and when I loaded it last week, it felt way too much yellow so I tuned it till it was reddish like in Roland Garros.

fabos,
it should be easier to reach the ball with your FH & BH slice, as you got ~36cm wider reach.
However, don't forget you have to position yourself well on the ball : if your player bends to reach the ball, he might put it back in play, but he'll hit less consistently and thus produces weaker strikes.
And I test mostly with the keyboard in these days...

1) If you set the DeadZone to 0.95, does it help ?
What is your controller ? Is there any way to change its center position in its settings ?

2) After have alt-tabbed out of the game, you may need to press Alt within the game else the engine might think Alt is still pressed down.

3) There are indeed a few situations when the player doesn't hit the ball on time ; it almost never happened to me, so it's hard to track down the issue.

4) Now the player always hits with the center of the racket, except if out of reach ; that's the point of the dynamic animation system.

5) That special FH slice was very likely the result of the dynamic system. I didn't put any newly created anim in there...

This is an example of one that looks unrealistic to me, I think it depends a lot on the stroke animation used as well - this is FH anim #2

The way the feet are positioned (still pointing forwards), feet not moving/lifting at all, little hip rotation etc... It looks like the shot is all arm. I don't think anyone would use a stance or technique like this on a low ball.

My general feeling about this anim system is that there's too much knee bend rather than changing shoulder angle - players IRL do bend their knees for low balls, but the upper body angle also allows the swing to be lower; 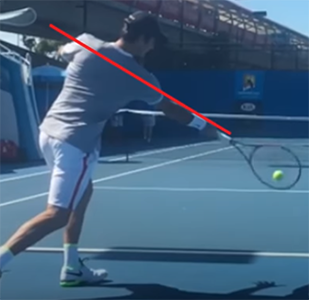 I guess this could be awkward to configure so it would produce a convincing result on all animations - maybe there could be some sliders in the character sheet to change how the animation should adapt to low balls, whether the player favours knee bend or shoulder angle etc.
Last edited by Rob92 on 08 Sep 2020, 21:10, edited 1 time in total.

manutoo wrote:fabos,
it should be easier to reach the ball with your FH & BH slice, as you got ~36cm wider reach.
However, don't forget you have to position yourself well on the ball : if your player bends to reach the ball, he might put it back in play, but he'll hit less consistently and thus produces weaker strikes.
And I test mostly with the keyboard in these days...

ok i will try
and tx for testingkeyboard

I assume Manutoo that the current animations for both FH and BH would be affected with this change? For instance some animations might look and feel better than others?

Really good changes in the right direction, something as well I noticed with this patch and the last patch has the backhand slice error ration gone up? I've noticed more frequent instances where the slice would just fly out of the back now despite it being a perfectly good backhand slice.