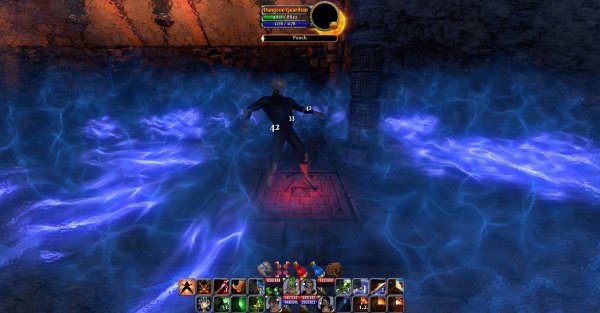 After a week of crazy work, the Beta 3 is ready !

I’m still always amazed by how long it takes to test, tune & fix the small bugs when playing a new level for the 1st time ; so the week has been very busy, because I really needed to finish the Beta 3 now, both in term of motivation, and for my planning, as I need to work a bit on my tennis game this new week.

So, what’s to say about the game at this point ? I’d say it’s pretty amazing ! I just hope other players will enjoy it as much as I enjoyed it, but the result is really close of what I had in mind 4 years ago when I first started to think seriously about this project : putting World of Warcraft combat experience within a Dungeon Crawler game. The game could be better, they always could, but at its current state, it’s already very convincing ; for me, it’s close of what I felt when I was playing WoW (although there are tons of small and big differences, we’re very far of a clone, for many obvious reasons).

So now, the Beta 3 will go to the Beta testers (I might look for a couple new ones soon, so stay tuned) and we’ll see if they can enjoy it or not.

And my planning is finally telling me there’s less than 3 months left of work… It might mean I’ll be able to release the game for end of September, and stop pushing the release date farther and farther away. 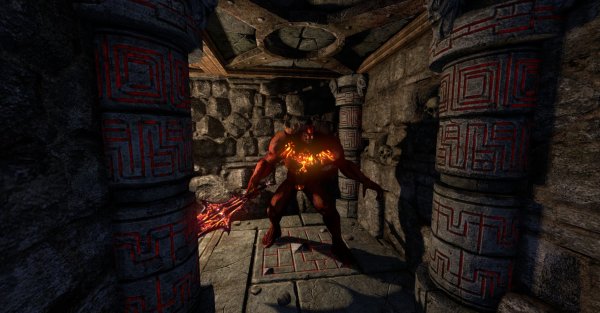 Demon in the Final Level

Yeepee, the Dungeon is (almost) finished !

Creation of the Levels 19 & 20 has been very fast : their design is more classic than the previous levels, and now I’m pretty efficient to create this kind of level.

Level 19 has a big room a bit in the style of the one found in the Level 8 of Dungeon Master (including its never ending corridor, for the ones who have a good memory

). Its puzzle is a relatively simple error/try & observation one, although there’s a bunch of things to watch, so it shouldn’t be too fast to solve it. It’s the kind of puzzle I very wonder if it’s too easy or not, but hopefully, I’ll get some feedback from Beta testers.

I struggled a bit more for the Level 20. I wanted to do something a bit special for the ending, but I didn’t get any big empowered vision ; however, I managed to make it a bit special anyway : it’s a bit smaller than the other levels, with less mobs, but 8 Elite fights (an Elite is a very strong mob) where all other levels usually have only 1-3 of them. I didn’t create a puzzle for  this level. I totally run out of ideas for them. But I still got something pretty nice : I put a painful labyrinth, or more exactly a small but suffocating maze, where it’s very challenging to keep one bearing. So all in all, it’s a level that is very in line with the whole Dungeon, while still offering some nice variations and unique stuff.

So as it was fast to create these 2 Levels, I got also time to integrate 3 bosses & design their fights for the last Tier (ie: Levels 17-20). Once again, these fights fit the tone of the game, while having a few specificities : 1st one is a sorceress with special spells, 2nd one is also a spell fights but with a completely different flow where you’ll have to dodge some big AoE shadow balls, and 3rd one is classic “ads” fight, where additional mobs come into play with a demonist boss.

I hoped to start the final boss fight, but I had to spend a lot of time to work on the visual FX for all the special spells of these 3 bosses. I might delay its creation anyway ; I want to be sure I won’t change my mind about its design : it’s going to be very special, with several phases.

So now that the Dungeon is more or less done, the game as a whole is also not far anymore to be done. Let’s review the main things that still need to be done to reach the release state :

Ok, but before all that, I have something else to do : upgrade the project to Unity 5 ; right now, I’m still using Unity 4. So I hope it’ll need less than 1 week, but I’m really not sure where I’m putting my feet with all this, it could get really messy really fast.

I’ll let you know the result in 1 week ! 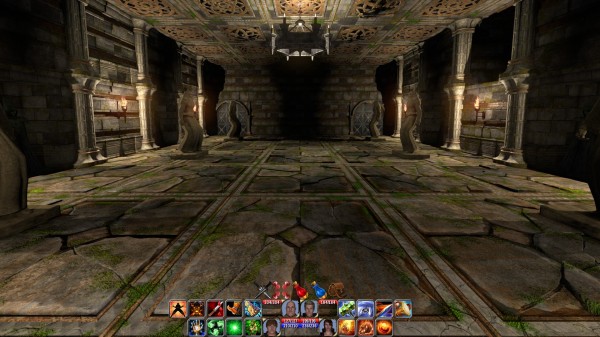 All in all, now it gives a pretty accurate idea of the final gameplay (if you can put aside the unpolished GUI, the sparse sounds & Visual FX and all other little stuff that will make their way into the final version).

So the result is pretty good, it’s nice to play it, but I’d like to make it even better, and for that, I’m looking for a couple of new Beta testers to bring some fresh eyes & opinions on the game. To be a Beta tester, you must have good analytic skills and be verbal about your impressions, and be familiar with RPG games, and/or Dungeon Crawlers, and/or World of Warcraft ;  If you’re interested, point out any review, critique, analysis of such games you may have made in a Forum or a Blog (or simply copy/paste it in your message) and write me from here : http://www.managames.com/mail_en/?subject=Dungeon Guardians – Beta Test .

A notable amelioration over the Beta 1 is that if you start at an advanced level, your party will get some decent gear, and thus it makes it much easier to test a specific level without redoing all the levels before it.

And let’s finish this page with a bunch of screenshots from the Beta 2 !