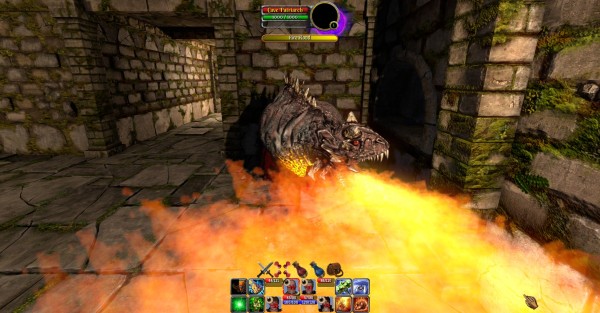 Last week was spent mostly integrating new creature assets into the game, still for the 3rd part of the Dungeon (ie: levels 9 to 12). It’s now almost done, it just misses the 4 bosses, but I’ll do them later, when the levels are finished.

I also integrated the 4th and last environment, the Dark Crypt, which will be featured in the final levels of the game.

With that done, I have not much integration to do anymore, and it’s good news, because I’m getting somewhat bored by it. It’s slow, it’s long, and it’s not exactly exciting as the creativity needed is pretty low, and over the past few months, I already spent nearly a couple of months doing that.

In last April, after have finished the 2nd Alpha, I did a planning to know how long time it’d approximately take me to finish the game, and I totally underestimated the asset integration part ; I thought it’d take something like a couple of weeks. Now, it’s clear it’ll take me a bit more than 2 months, and it means the game won’t be finished before end of April instead of end of February as expected (I also slightly underestimated over little stuff

). Anyway, it’s nice to feel I’m getting closer to the end, I’m getting impatient to see the final result !

Now, I’m going to focus back on the level design and create 4 new levels within next couple of weeks (or a bit more if I take some Xmas holidays