GRINDIN' IT OUT ON THE GRASS IN RAINY DEPRESSING ENGLAND.
But, first, we get to delay the trip to ugly England for a week... because Coach Leelee bought a grass court to practice on! A grass court. In Phoenix, Arizona. In June. That will burn and turn into clay within a few minutes. Just like Wimbledon, LULZ AMIRITE, FEDTARDS??!!

So, we skip Birmingham. A Tier III with a 56 player draw. Eww. 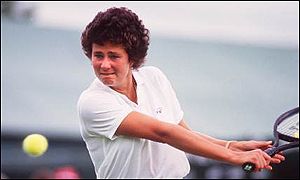 PAMELA: This is unfortunate. Did you know that I won Birmingham FOUR STRAIGHT YEARS? My fro pwned those grass courts like Zuluaga in Bogota. My sage advice and experience...

Oh, Sabine. The quirky lefty. Not all Belgian players are repulsive looking. She's a talented varied player around 80 in all stats, except power. This will be tricky, so Brie uses 20 experience points.

Jen completely changes her game, running to net every point, but this is grass, and...

Oh, come on! Coach Leelee's team can't even tank matches correctly! What a world... let's get Wimbledon over with. Grass is for the cows.

KRUMM~!. I'm surprised she's ranked so lowly at this point. She's also kind of a crappy varied player. But, we know her very flat strokes are a nightmare on grass, so 10 experience points. Slams are important.

Ugh. Ms. White is one of those random low-ranked players with great skills. Her volley skills are in the mid-to-upper 90s. But, her groundies are dreadful and her strength is only 16%. Another 10 experience points. Fight.

Brie's serve is saving the day. Rarely getting broken.

MARY JOE FERNANDEZ: Ok, why do I have a coach that's always telling me to lose matches. In slams, no less. You know what Leelee. And Kolya. You're poopheads. I QUIT. And I'm becoming a really bad announcer that speaks in a monotone voice.

So, young Brie is on her own vs. Maria Jose. Who is very angry, and wants revenge for the CHEATING she has endured.


Another slam ends in disappointment. Coach Leelee needs to find a replacement for Mary Joe Fernandez. And Brie is somehow 24th in the world despite being pretty awful. Next, SoCal! Yay!
Hrmph.

reactions to this topic should be done here => topic11-2169.php
Please stay courteous

The most wonderful time of the year!

We skip Cincinnati - Tier III because it's still a lowly event in this game. And whatever summer Euro Tier IVA's.

And we still haven't found anyone to replace Mary Joe FERNANDEZ (USA) on Coach Leelee's team. The best option was Helena SUKOVA (CZE), but her goals are based on doubles... COACH LEELEE: No more doubles. In any way, shape, or form. We're waiting for someone awesome like Stefanie GRAF (GER) or Gabriela SABATINI (HOT). Oooh, Gabbbbyyyy...

This is on boring ol' cement instead of blue-green, for some reason.

We played her before. She's not good.

We'd normally have KING KOLYA instruct Brie's opponent on how to lose, but we don't can't lose more players. Besides, Conchi is already angry that she can't play on her beloved clay this time of year. So, she's not playing with her usual loopy patience here...

Hehe. Brie again. Now you see how it feels to keep losing.

Mary Joe is an excellent volleyer, average from the ground, and Coach Leelee tripled her strength when she worked with her. Her previously skinny frame is no more.

Shaun is a lanky, average volleyer. Net skills in around 80, rest is meh. Brie should control things from the baseline.

Blargh. Why is she seeded so low. Arantxa has weak strokes, but her consistency and precision are all near 100. Even her volleys are in the 90s. But, her top spin is also at 100... maybe we can overpower her with Brie's stroke power at 80%.

This is a rare 56 draw Tier II (the only other is Amelia Island, which Brie BANHAMMER'D). They're also lower points for winning, so these blow.

We played her in Australia, and won. A middling varied player.

This was a gift. Martinek is ranked 130 and is a lousy defender.

And, now we're screwed. Helena is a strong puncher with groundie skills over 80, net skills in the 70s, and serve power over 60 (the only player I've seen with that). Coach Leelee also decided not to add her to our team, so we'll pay for it.


The rest of American hardcourts (Toronto, New Haven, and US Open) next time.
Hrmph.

Brie WHITEHEAD (USA) won her first WTA title at the 1991 US Open.

Then, she won 1992 Tokyo Indoor. Indian Wells. Miami. Charleston. Warsaw. Berlin. And Rome. Gaining the #1 ranking at Rome. And would win 90% of tournaments she played after that.

At first, we celebrated. Then, we laughed. Then, we threw our hands in the air and said "F**k the heck?!" while laughing.
Then we realized that writing about 70 consecutive wins is not fun. You're supposed to be terrible, Brie!

To conclude this career... Brie reached #1 on 12 May 1992. And it would have been a lot sooner if Brie didn't play Monika SELES (YUG) in like every final. Thus,


This is not the end for me, though. I plan on writing another story soon. Based more on my style of play... untalented bug serving.
Hrmph.

So, I'm not doing another diary here...

But, I'll gloat about my 2nd career with Leelee PHOENIX (USA). A 6'3 hoss who plays a varied style, and wants to hit 140 mph aces.

Then, reached the 3R of Birmingham... which was truly amazing. Stunk for most of the summer. Then, won 6 challengers between the US Open and YEC (Five 50k's and a 100k in Seoul). Finished 1990 ranked 60th.

1991:
Was ranked high enough to play all the big girl tournaments... reached Indian Wells SF and Miami F to fly up into seed range. Then won... Berlin, Eastbourne, US Open, Luxembourg, Moscow, Linz and YEC to end the year at #3. Only 180 points behind #1... grar. And #1 was my coached Nathalie TAUZIAT (BITCH).

1992:
Perfect so far this year without a dropped set through AO, Tokyo, and Indian Wells (a BS ankle sprain at Sydney to start...)

I think I've just about mastered this game now. A player from my team (Leelee, Caprifati, Tauziat and Sabatini) has won every tournament we've entered since 1990 San Diego.

Goals I want to reach:

Incase anyone still cares, and they don't, I started another Brie career with my knowledge of everything in this game:

Brie is the best.
Hrmph.

on what difficulty did u achieve that ? was it with the latest version ?

Nice to see you back...hopefully...

on what difficulty did u achieve that ? was it with the latest version ?

Yes. I've played this game far too much and mastered it. And I use my fellow teammates just to soften draws for my player.

So, I'm a year behind and all, but I just read the whole epic today. As everyone else said, it's extremely interesting and hilarious. I don't suppose you blog? You have that sort of casual deadpan writing style.

Anyway, thanks for the entertainment!