I'll add sun positioning at some point, and create night sessions in the future.
ManuTOO
== Mana Games ==
>> I don't answer Private Message, except if it's really a _Private_ topic <<

can i expand the court in devmode?

Stoilov,
I don't understand, what does it mean ?
ManuTOO
== Mana Games ==
>> I don't answer Private Message, except if it's really a _Private_ topic <<

make the court bigger. The crowd to be further like in real life. And, one great feature i thought about was the underarm serve. It would be awesome to have it.
Last edited by Stoilov on 01 Jul 2021, 01:06, edited 1 time in total.

One feature I thought of is being able to designate for CPU opponents what type of return they hit. For instance players like Federer and Wawrinka will 90% of the time just hit slice returns whereas a player like Djokovic will hit the return down the centre towards the baseline of the opponent.You could also designate where the returner positions themselves as someone like Andy Murray will step in to return second serves whereas Rafael Nadal will stand further back to take a big swing at the ball.

Some of these have been mentioned already but even then I'd like to +1 them.

- (Optional) cutscenes during matches (like the warm-up or the coin toss, or just the break between sets and side changes). That could add another layer of realism, even if it's mostly fluff. Since not everyone is going to be fond of this (or wants to click it away each time it happens), this should be entirely optional, perhaps as a setting.

- Related to the above: court fly-overs with the camera during breaks (like when the set summaries are displayed). Mainly so we can see more of the 3D stadiums in the game - something we don't usually see with the most common camera angles used in playing the game.

- Variable top spin percentage. The best players can control the amount of top spin they add to a ball, adding more top spin on clay courts and less top spin on grass courts. Now we're limited to the same top spin amount for *all* court types, only being able to change the top spin amount in training, at the cost of valuable training points. Maybe we could have a +/- 10% slider, where a player with a 40% base top spin has the option to set it anywhere between 30% and 50% during a match?
Maybe even go further with this and add "spin control" as a possible talent, where one star would mean a +/- 20% slider and two stars even a +/- 30% slider? Just thinking aloud here...

- Making the "tournament selection" screen available at all times in the tour info. Now we only see this screen when selecting a tournament to play for the next week: 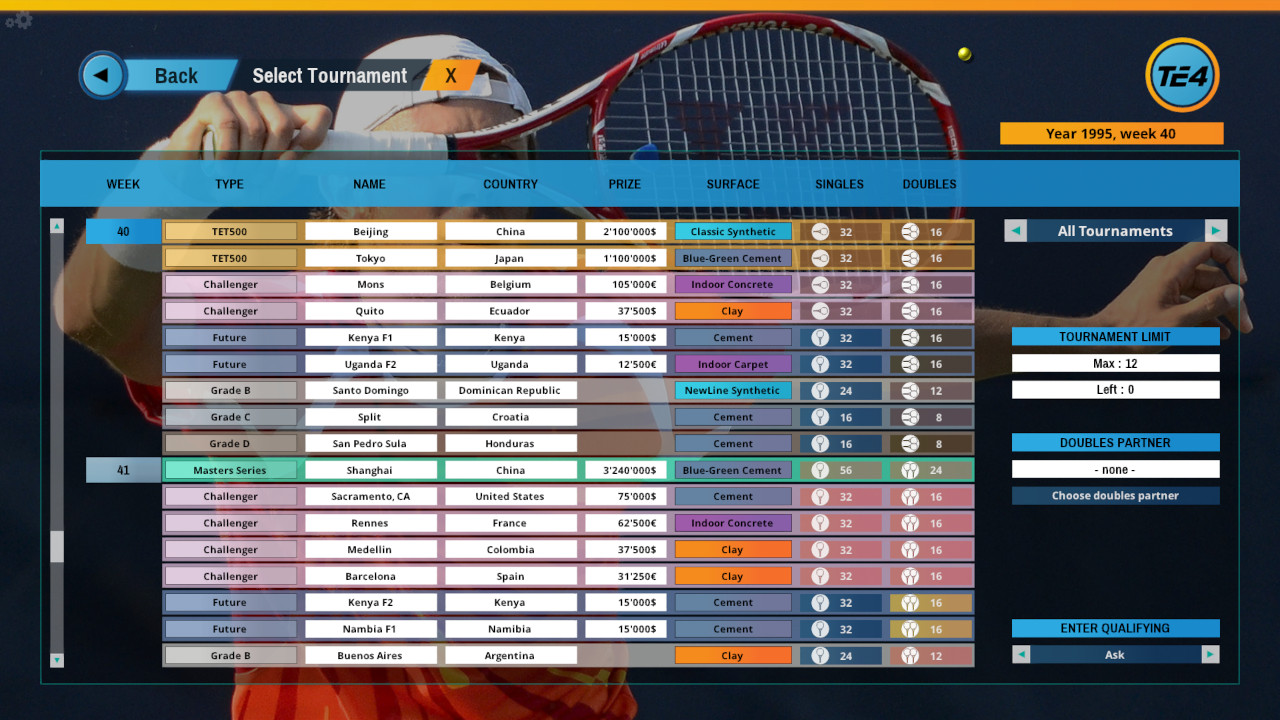 Since that's the only screen where we see what tournaments lie in the immediate future, it could be useful to always have this on hand in the tour info.

I assume the "booking" of tournaments is something that's in the works? The tournament selection screen has a "booked tournaments" filter in the game now: 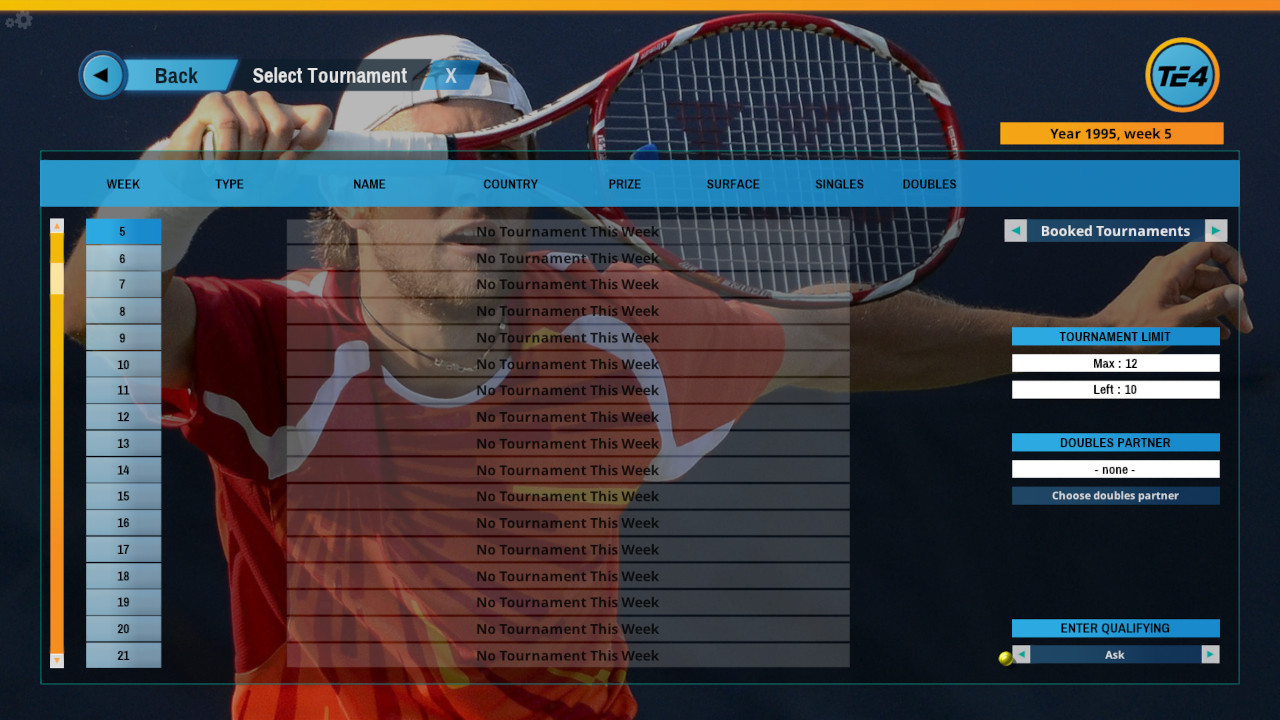 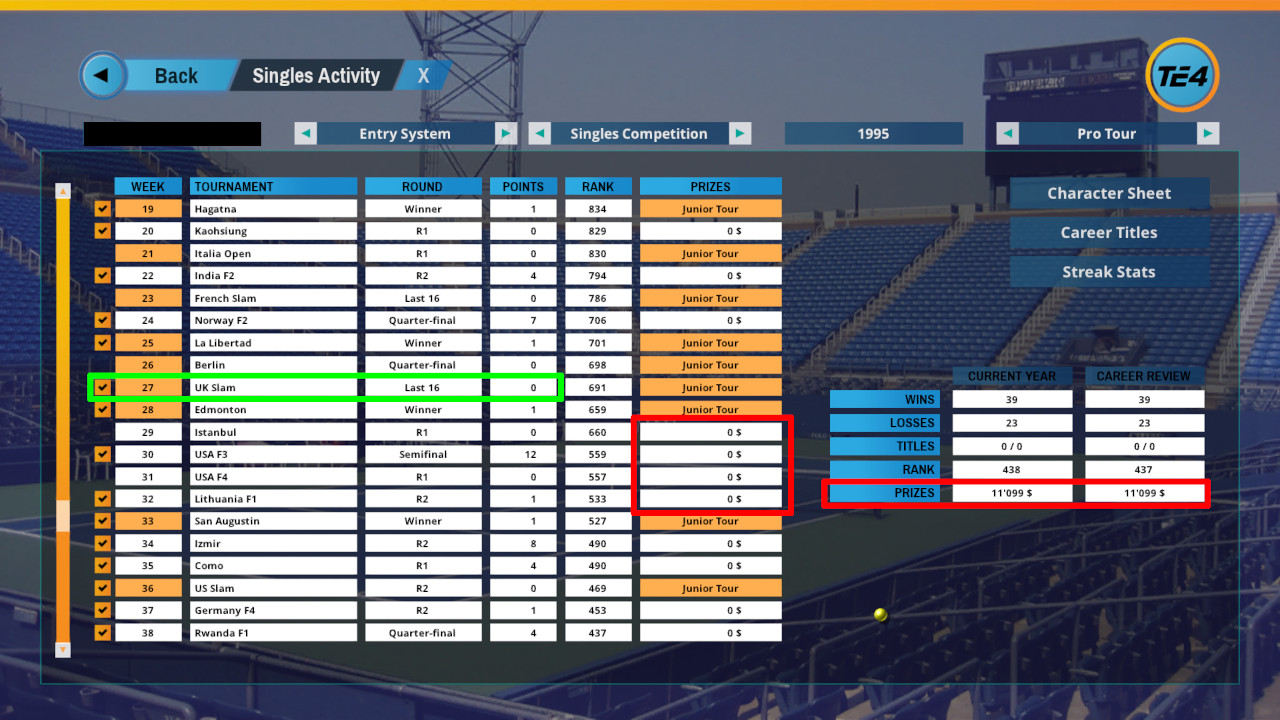 I played the Junior UK Slam, was defeated in the third round, had the option to enter the qualifying stage of another tournament that same week, and advanced a couple of rounds there which netted me a couple of ITF pro tour points. The points aren't visible on the UK Slam entry, but we do see the check mark that indicates that the week counts towards my Pro Tour points total. If Week 27 had two separate lines on that screen, one with the Last 16 at the Junior UK Slam and one with the Future tournament qualifying round, then all the info would be visible. Now it isn't...


And before I sound critical of the game, I'd just like to add that Tennis Elbow is hands down THE best tennis game out there (and I've played practically all of them). Not a single other title comes close to the awesomeness that is Tennis Elbow on the things that matter (realistic career modes, challenging online play and especially fun, addictive and balanced gameplay)! Hats off to manutoo!

I have an idea. To make the game more realistic, is it possible to add something like "Confidence level" during matches? You can display it as a bar in the same area as Stamina, Stress, etc... For example, players during matches can have maximum of 100 confidence points. They can gain confidence point by hitting a winner, serve an ace, winning a long rally, etc... You can balace how many confidence points player can get during each situation. For each level of confidence, players will have a stat bonus. For example, with maximum 100 confidence points, players can have maximum +10 stat bonus in skill stats and +5 stat bonus in physical stat. You know what I mean, right? I think this will make each match much more realistic and unpredictable.

I'm wondering, in light of what's been happening at Wimbledon this week, do weather conditions ever have an effect & is it possible for players in TE4 to ever slip and/or fall? Or would this be too difficult and time consuming to implement?

manutoo wrote:I'll add sun positioning at some point, and create night sessions in the future.

That's excellent news! If possible, it would be interesting to also add a pattern "court_night", so the game automatically selects the appropriate court during night sessions, just like how the "court_used" works for grass tournaments.
My courts here: topic29-15848.php

I saw some very old posts for older versions of TE but it still has not been implemented:

Would it be possible to include more Practice options in the final release of TE4?

Hope you're doing well. I just thought of a small-ish thing that could potentially improve animation realism a lot.

Sometimes in the game it looks strange that every swing is the same speed regardless of the ball. If a player hits a 90mph forehand the racquet speed would be much much faster than a slower 70mph rally ball. If you could make it so that faster shot speeds resulted in a sped up racquet swing animation, there would be a greater variety of shots in the game without making new animations.

What do you think about this? I don't know if this is possible, but it seems like a simple way to increase variety of animations without having to create a bunch of new ones.

Andynator7,
if the acceleration animations are played faster, it'll look strange because the body & the feet would also move faster, not only the arm ; the arm could also look strange because the physics laws aren't linear (it's like in movies when they accelerate the car races, you can notice it right away).
There's already the possibility to have an acceleration animation, as long as the preparation lasts the same as the animation for the normal strikes, which is mandatory to keep things smooth in case the user changes of strike during the preparation.
ManuTOO
== Mana Games ==
>> I don't answer Private Message, except if it's really a _Private_ topic <<

So there are a few things that is a real pain in the ... in TE 2013 (imho).
First, offline, playing the tour: When you are in the character selection menu before a match there is no turning back anymore. I think its when you finished a match, then clicked next and then all of a sudden you cant go back to the selection window.

Second, online, playing online matches: So when you host a game, please also display info about court/number of sets that you have currently selected there. It is so weird to host a game without any info what its about.

I think its relatively easy to add new courts to the game and i understood that you (Manu) want to make it even more easy in the future. Including to customize the court for different stages of the tournaments. Thats great. For my personal experience and motivation, it would be awsome to include the possibility of different scoreboard designs. I know it is somehow possible but it seems more difficult and i did not understand it yet. So my suggestion is to make this part more accessible.

The 2nd suggestion would be some kind of training camp where I can focus on different skills. After a disappointing defeat, a glorious Grand Slam victory or a series of multiple weeks without a break, i would take a 2 or 3 week break with training focussing on weaknesses or relaxing. That would fill a gap because I find it unrealistic that the game only says „did not play this week“. In this way you would be able to earn XP without playing (like in Youth Tour). You could cap it on a maximum of maybe 4 or 5 weeks per year.

To be fair. It would not have a great impact performancewise but increase the feeling of simulation and immersion.

Have a nice weekend!!