There's likely a ton of little (and maybe bigger) bugs. I won't be able to work on it tomorrow and I'm not sure for the following days so I release it now if anyone feels adventurous...

(EDIT March 30th: it should be mostly bug free now, thanks to all the user reports done in this topic !

Comments :
Old comments are moved there so the changelog will be easier to follow : http://www.managames.com/Forum/topic11-29726.php

List of already implemented new features since TEM1 :
- Men Tour starts in 1973 & Women Tour in 1983
- Fictional years are generated in real-time, so each playthrough sees different top players in the future
- Junior players, management and training
- New menu design
- Olympics
- Better injury handling (eg: can go on playing with the risk to get more injured)
- Training Schedule (can save a training schedule & reapply it)
- Modding : can have a completely different Tournament list each year
- 3D Matches with real-time coaching

Main future features :
EDIT November 4th 2018: all the new important features are in the game now ; so here the list of the little things left to do
- Polishing and possibly a few more actions for the real-time coaching, plus experience boost
- Porting the game to the Unity engine (it'll help with compatibility with many different computers, and with font clarity in the menus)
- New Coach Center in 3D, with Medical Center
- Focus skill (it'll allow having slow players who still hit correctly the ball when they're a bit late on it)
- A few new Talents
- Little things here & there

What to test ?
The main things to check and report are :
- Junior training and management ; the idea for the training is that your player should reach arond 20% in all skills and 100% in all potentials around 18 years old ; I tuned for that in Junior difficulty level so it should be easy in Club and tough in Pro and likely impossible in Incredible (but I only tested in Junior difficulty so I'm not sure)
- the game should globally still works as well (and bad) than TEM1, so let me know of any new bugs
- are the new menus easy to use and consult ?

Free Key for TEM1 Buyers
People who have bought TEM1 from managames.com since last August 2017 got a free Key for TEM2. If you didn't receive it, you can ask it to be resent from here : http://www.managames.com/Key_en.php?Lost .

Known Bug on MacOS
It might not be possible to change the player colors with High Sierra. It'll be fixed when the game is ported to the Unity engine, in many months.

How to buy the game ?
You can buy the game from the order page that pops up when you close the demo, or from here : http://www.managames.com/tennismanager/order_en.html .

Play the 3D Matches
If you want to play the 3D matches, edit "C:\Program Files (x86)\Tennis Elbow Manager 2\Tennis.ini" (or your Profile .ini if you have created one) and change this line, under [3dEngine], from :
DevMode = 0
to :
DevMode = 1
Then save & launch the game, click on "Back", then on the "Training Club" icon, and there you'll be in the messy land of old TE2013 menus with the new TEM2 menu parameters... 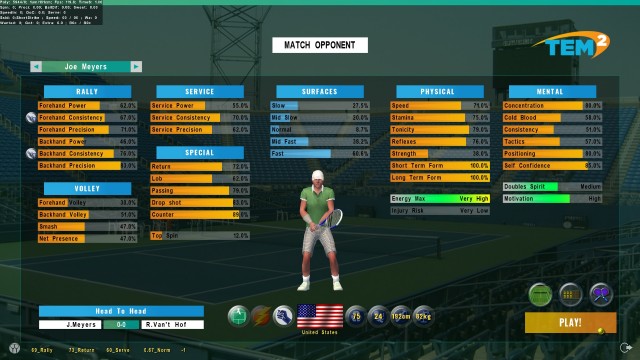 Bug Fixes :
- Save/Load : saving games were corrupted when playing in recent years, leading to many crashes & missing players once loaded
- Switched Doubles players could have wrong singles rankings at the start of the game
- Default starting date is now 2017 and is correctly saved if changed
- Some doubles specialists were not correctly flagged

Notes :
- Paypment & Key processing is now working well, thanks to the 2 first TEM2 customers to have proof-tested it..!

Lazarus,
some doubles specialists are not correctly configured, so I fixed the ones you have reported but if you see some more, let me know !
ManuTOO
== Mana Games ==
>> I don't answer Private Message, except if it's really a _Private_ topic <<

Bug Fixes :
- Olympics : correct year is used to choose the city
- Wildcard : fixed message
- Davis Cup : fixed message
- Draw : scrolling to the right from any page except the 1st one was leading to bad bad stuff
- Weekly News : fixed

Warning :
- Next update won't be able to load your saved games ; there's a little mismatch and I have to fix it...

(EDIT: it turns out it's working normally, I had just written a confusing comment

Bug Fixes :
- Activity : Career stats were reset at end of each year
- Activity : the Activity was empty when viewed from a Tournament Draw from View All Tournaments
- New Game : in the player talent screen, changing the country was destroying the assigned stars
- Evolving base : the future rankings of existing players were not reloaded correctly and they were all ending being number 1 strong...

- Junior : Grand Slams were in 3 sets instead of 2

Notes :
- Due to a couple of bug fixes above, saved games are actually not compatible anymore, so you'll have to start a new game...

Notes :
- Due to a couple of bug fixes above, saved games are not compatible anymore (again), so you'll have to start a new game...

Bug Fixes :
- Fixed most small bugs reported in the comments
ManuTOO
== Mana Games ==
>> I don't answer Private Message, except if it's really a _Private_ topic <<

New Features :
- New Game : added a screen will all countries so it might be faster to choose the one you want

Bug Fixes :
- Fixed everything reported in the comments
- Junior Training in Club difficulty wasn't improved unlike said in a previous update (I had changed the number in the wrong place

)
- School & holiday weeks are correctly handled for the Junior training

Notes :
- On Friday I'll hopefully release a new version with the Grade C tournaments for the Junior, whose max allowed rankings will be 100, so it'll be easier to win a match when starting as a Junior. This will invalidate your saved games.
ManuTOO
== Mana Games ==
>> I don't answer Private Message, except if it's really a _Private_ topic <<

Notes :
- Because of the new tournaments, your current saved games won't be compatible
- I'll fix any reported bug for this version and then I'll port it to Mac, and it'll replace the current TEM1. If you have bought TEM1 from managames.com in the past 7 months, you'll then receive a free key for TEM2 to your email address. Hopefully, it'll be done by Monday evening.

Bug Fixes :
- All bugs reported in the comments fixed (except the one about the doubles partner), and some more...

Notes :
- It might have too good Junior players in qualies draws (ie: they should enter the main draw instead) ; I'll try to fix that soon
ManuTOO
== Mana Games ==
>> I don't answer Private Message, except if it's really a _Private_ topic <<

Bug Fixes :
- Players : fixed a big bad bug that was making a few players too strong ; you need to start a new game to get rid of the ones in your saved games
ManuTOO
== Mana Games ==
>> I don't answer Private Message, except if it's really a _Private_ topic <<

Bug Fixes :
- Players : the Evolver was also making evolving the players in the real years, instead of sticking to the specified RankPerYear...

(you'll have to start a new game to get rid of the players already evolved)
ManuTOO
== Mana Games ==
>> I don't answer Private Message, except if it's really a _Private_ topic <<

Changes :
- Rankings : rankings rules for Men Tour simplified to match current ATP ones : now the Best 6 tournaments outside of the mandatory tournaments can be of any category (before, for top-30 players, it should be 4 TET500 and 2 TET250)

Bug Fixes :
- All bugs reported in the comments fixed..!

Changes :
- Yearly Stats : can choose to show Junior or Pro rankings (if you start a new game ; current saved games will show silly stuff)
- Head To Head : can show only Junior, only Pro, or both
- Qualies : a good part of players who were ending in qualies with rankings high enough to go into the main draw are now going into the main draw (it happens mostly in Junior tournament)
- Documentation : new design for English documentation
- Training : tuned again a bit the Junior training so it should be easier to raise the potential and win your 1st match

Note :
- Junior stuff should be more or less done now, next Build should see new features and hopefully it won't come in a too long time..!

New Features :
- Trainers : added the aging specialists that will significantly lower the effects of aging (1st one starts to work on the year 2009, 2nd one on 2012 and last one on 2015) ; you can check your current anti-aging process in your player's Team tab
- Modding : added a TopTopPresence & TopTopRanking in TourCategory.ini & Tour.ini to fine tune the presence of the best players of the year in each tournament

Changes :
- Doubles : raised the Doubles Spirit of the best doubles specialists so they won't have skills good enough to be dangerous in singles (might require further tuning)
ManuTOO
== Mana Games ==
>> I don't answer Private Message, except if it's really a _Private_ topic <<