Keep it up, Khalil!

Hi everyone, Week 26 was acceptable but Week 27 was bad for me, I lost from the first match in wimbledon...

R2: ratherplayer def. M.Khalil Guedria[20] 6/4 7/6(2) 6/2
i don't really know what happned in that match, it was'nt my day at all , maybe that was my worst match this season, i played very short and i did soo many errors ( 71 error, 5 double faults), with this level of play against a dangerous player like ratherplayer you don't have a lot of chances, second set i was 3/1* up and i served for the set at *6-5 but i did'nt take advantage of that unfortunately, Congrats.

Surely disapointed to leave a big tournement like wimbledon that way but that gives me more motivation to play better in the upcoming weeks, next for me will be davis cup with my country tunisia, we will face egypt for a place in the semifinal, it will be a taugh match and i must be ready for it.

This week i played davis cup for my country tunisia and unfortunately we could'nt get the win even that we was very close as mohamed was two times 2 sets to 0 up... it was a very close match , only 2 games made the difference... that's disapointing... but well played mohamed and congrats for egypt.

I played two matches, the first was against The Joker, i lost 5/7 in the fifth set... i fought hard but i was'nt lucky at the end... he have amazing net play.
Second match was against Midooayman, i won 6/2 In the fifth set after being 2 sets to 1 down... i played amazing 4th and 5th set, i gave everything i have and i fought hard... but that was'nt enough unfortunately, i hope to be able to play again next year.

Here is a hot shot from my match against midooayman:

Next week i'm in bastad, my first tour title is possible there... i will do my best to get it.

Hello everyone, it was a decent week even if i did'nt acheive what i looked for...i lost in bastad SF against ShoNe the n1 seed...

R2: M.Khalil Guedria[4] def. Roddick02 6/3 6/0
I struggled at the begining of the match and i did'nt find my ryhtm quickly... i was unconsistant, he broke me from the first game then i broke back and led 2/1* and i had 3 bp in a row but i missed them... after that i broke him at 3/2* to lead *4/2 then he broke me again for the second time but from this game i played better with more consistancy wining 8 games in a row to finish the match... he have a good potential.. GG & GL.

QF: M.Khalil Guedria[4] def. Emir Guermassi[7] 6/1 6/2
He is my freind so i know him very well... i controled the match from the first until the last point without any dificuly... GG & GL in the future.

SF: ShoNe[1] def. M.Khalil Guedria[4] 6/3 6/4
I have known that it will be a hard match since i know that he is a very good player especially on this surface, i played the first three games with a good rythm (*1/2 ) but since then there was some lags which effected my concentration and i did many easy errors... so he broke me twice to serve for the set at 1/5* then i played better and returned one of the two breaks but finally i could'nt return the other break losing the first set 6/1... second set he broke me from the first game but quickly came back breaking two times to lead 4/1* and i also had 3 break points to break again but i did'nt take advantage of that unfortunately... i had a game point in the next game but i could'nt take advantage of it unfotunately... after that the game gone his side,he was almost errorless... rallies were too long and it was complicated for me and i could'nt find a solution... we played a very long point at 4/4 15/15 which you can see here... anyway it was a good match... congrats for ShoNe for a well deserved title and i hope to see you soon.


For singles i will skip for until the 3 big tournement of the american tour ( Montreal, Cinicnati,US Open ) but i will play doubles next two weeks in Granby Chalenger and Washington.

GO FOR THE TITLE

Yeah it's a big opportunity and it should not be wasted... i will try my best to get the title.

MarkChan wrote:P.S. I dont like clay so I wouldnt play kitzbuhel

I guess you would of play it better than drawing Mohamed in the opening match of Washington.

This week i played granby doubles and i lost in the final to the former n1 Kiril...

SF: M.Khalil Guedria[1] def. JerryMa 7/5 7/5
Good game, he was dominating at the begining... i was 1/5 down but fortunately i played a lot better wining 6 games in a row saving 9 set points( i was lucky in some of them) to win the first set... second set we was exchanging the breaks until i finally broke him at 6/5* to win the match... GG & Good luck in the future for such a fair player.

, Great Game by Kiril and Congrats for the title.

Next week i'm in kitzbuhel Singles & doubles as i said... hopefully i can bring the title,and if i did'nt, i will be titless this year...

finaly i won my first tour title... i waited so long for that, and now it's the time... it was a great week: i did'nt lose a single set in my whole matches (all matches + uncounted reserves).. i played good in doubles too, i reached the semi final. 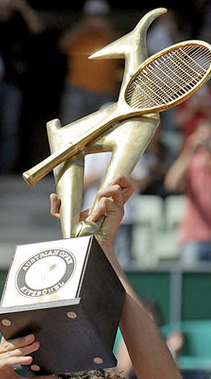 QF: M.Khalil Guedria[4] def. zrinkecsportnet 6/4 3/0 ret.
his sportmanship was poor, i do not really want to talk about this match.

SF:M.Khalil Guedria[4] def. Ayoub Rima[2] 6/3 6/4
Good match, it was a close match... each set was decided by only one break, in the second set he had some chances, he had triple break points on my serve at *0/1 but i fortunately saved them and broke him at 4/4* after that... Good Game and Good luck for the future.

F: M.Khalil Guedria[4] def. Sampreas[1] 6/3 6/2
not the good match that i looked for, lags ruined the match and effected mine and his concentration... but still a good game... GL in the future.


Doubles:
QF: M.Khalil Guedria def. Scofield 6/0 6/1
Good game, i was better in that match and i controled it from the begining, Good luck in the future.

SF: Quasar[2] def. M.Khalil Guedria 6/3 6/3
he was better than me... i broke him at the begining but i could'nt conserve it... i had few chances also in second set but he played better... Good game and Good luck.


Hopefully the title of this week will give me more confidence to play well in the upcoming events... my schedule for the rest of the season is all big tournements ( Montreal,Cincinati, US Open, Shanghai, Paris) and i still have 1 small tournement remaining to play but i still did'nt decide where and when it will be.

finaly i won my first tour title... i waited so long for that, and now it's the time...

Hello everyone,Not a bad week... lost in the 3rd round of Montreal masters...

R1: M.Khalil Guedria def. JKK 6/3 6/0
I started well leading 2/0 but after that i lost a bit of my concentration so i lost the next 3 games but since then i played solid and i did'nt give him a lot of chances wining 10 games in a row to win the match, he have a good potential...he just need more work, Good Game and Good luck.

R2: M.Khalil Guedria def. LetsGoBro[6] 7/6(4) 7/6(5)
The conditions were as usual (400ms delay) so it was unfair anyway whoever is the winner... last 2 meetings were for him and this one fortunately was for me... i don't like to play against freinds in early rounds, really sorry for him... best of luck in the future.

R3: The Joker[9] def. M.Khalil Guedria 6/1 4/6 6/3
He was better... he was very agressive and my defense was'nt effective today...next time hopefully, Good Game and Good luck for the QF & for the upcoming events.

Hopefully i can do better next week in Cincinati, Good luck for everyone there.