I am planning to make a patch cold ATP Tennis Legends. The patch will contain ATP legends such as McEnroe, Lendl, Bjorg, Agassi, Sampras and more, so I need some help with the courts, scoreboards and faces. If anyone whould like to help me I will be very thankful

Thank you very much manuparody, my first request is Australian Open 2007.
http://www.youtube.com/watch?v=1ly4OfXeHZI
DOWNLOAD MY OUTFITS ---> topic29-16615.php

Australia Open 2007.JPG
What do you think?
You do not have the required permissions to view the files attached to this post.

Phantastic Project!
Soon I will beam up some Legends courts

Some of my classic courts I published last year:

http://www.mediafire.com/?12i9legt1l5gyvo
You do not have the required permissions to view the files attached to this post.

crel wrote:Some of my classic courts I published last year:

I've been dreaming of a nineties AO court to play on! I didn't think it could be done so well.

Two changes could make it perfect: giving the darker green part of the court a more natural and 'scuffed' appearance. Rotterdam's 2d court might be good model, but it's a little darker than this Laver. Less importantly, I'd photoshop all the non-Ford logos out, including the modern AO logos, and make the background walls uniformly blue. I think I might try the erasing on my own, but I suspect making the court surface look more natural would be beyond my limited abilities.

crel wrote:Some of my classic courts I published last year:

I suggest you check the topic by Torto14!and also the Sam topic for faces...it s a gold mine when it comes to old outfits,and old faces...hope this helps you!i have dreamt about having a legends patch for a loooooooooongtime

This ATP Legends Patch is included in my Update for my MixPatch 2013. In the new way for changing outfits there is a profile cold 'History'. In that profile you've got 36 old players. Also in my patch is included some old courts, like Australian Open green court, Madrid purple and more. Also you have some new scoreboards.

I made the final court of Rome 2005, the problem was that I can not do court.ini
You do not have the required permissions to view the files attached to this post.

wjdygert:
THX for your suggestions but I am very busy this week and I will try to change the court next week.
You may post a pic of what is in your mind ............?

Re: my classic courts

crel wrote:wjdygert:
THX for your suggestions but I am very busy this week and I will try to change the court next week.
You may post a pic of what is in your mind ............?

Here's an image with that clearly shows the solid blue color scheme of the baseline wall for the nineties AO. It also shows the lack of logos besides Ford and the 'Melbourne' marker in the middle of the wall: 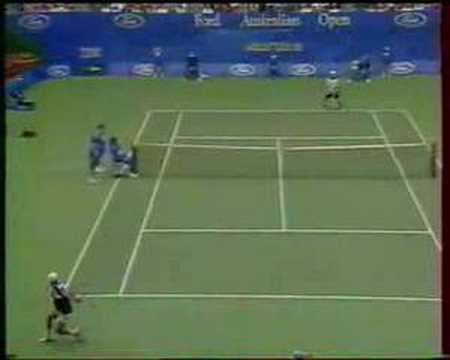 This is a court with a similar court color scheme as nineties AO (just the court itself, not the walls), but it's a bit darker. The court inside the lines is slightly scuffed in this one (just like the actual nineties AO court) whereas in the third AO court above (the one I've been referencing), the court is only scuffed outside the lines; inside it's unnaturally smooth: This video would be best to work from in order to make a day court under bright sun with shadows on the wall. I didn't use a still from it earlier because the shadows make the true color scheme of the baseline wall hard to make out. It also shows that there are no logos on the court itself (including the chair) and that the marine blue of today's AO is nowhere to be found on the court:

Cool..I was hoping someone would eventually create a tour patch like this..the 80s era was such a great era for tennis.