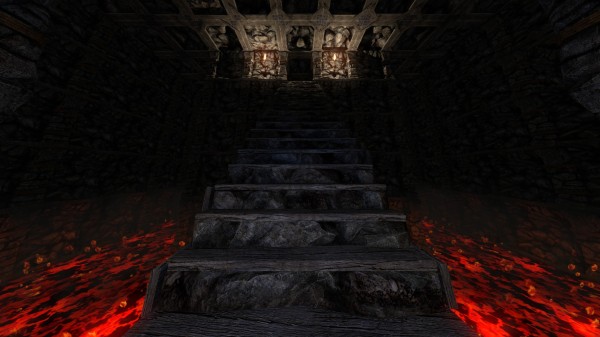 Highway to Hell ! (screenshot by Logort)

I did nearly nothing last week, so no weekly update today, but instead, let’s plunge into some overall analysis. And more precisely, let’s review the reviews of the game !

At heart, I’m a game designer, mostly because I love video games, play them & analyze them.

What I do best is find something I like, see what’s wrong, and make it better. For my taste.

I learned since a long time that my taste is different from many other people’s taste. And thus, if I want to say to someone that something is great, it’s better to explain why it’s great, instead of only saying “it’s great”. It works same when it’s bad. Because my great and my bad can actually be the bad and great of someone else.

The Fall of the Dungeon Guardians has now got quite a few reviews, and unfortunately some reviewers mistake their taste for an objective truth. These reviews didn’t make their way in the Review page I just linked, though…

The particularity of Dungeon Guardians is its Tactical Combat system. It’s unmatched in solo video games, so it requires some serious learning if you never played any MMORPG before. It means you have to read 5-10 minutes of explanations during the tutorial, and then read the descriptions of your Toon abilities, and then do some thinking to understand how everything work & fit together, and finally experiment all this and see how to optimize your damage, your healing, your aggro, and your damage mitigation during the numerous fights of the game.

This is passionating if you’re into this kind of game, but it’s a lot to take for the average Dungeon Crawler fan where the combats are usually pretty basic (ie: strafe, turn, wait for the grayed buttons to not be gray then hit ; repeat over & over again). Fortunately, you can easily lower the difficulty of Dungeon Guardians at any time, but if it’s too low, it means you can do anything and you won’t die, or if you really didn’t understand anything, you will still die and rage quit, usually blaming the game for being unbalanced instead of recognizing you didn’t make the required efforts to understand what was going on.

What I wrote in these last 2 paragraphs, you won’t find it in any review of the game (you’ll find parts here & here though, but not as a whole). It’s ok, a review & a gameplay analysis aren’t the same thing. But the reviewers should have that in mind when writing their review, but a few of them didn’t.

So basically, the reviews the game got belong to one of these 3 groups :

I guess the most professional reviewers are the 2nd group : they didn’t totally get into the game, but considered other people would be able to do so.

The 1st group usually didn’t point out it could be hard to get into the game, so they might be just too smart…

At you might have guessed, my grudge is with the 3rd group. These people (they probably don’t deserve the title of reviewers) seem to not see the difference between a review and an opinion ; they don’t feel entitled to understand how a game works to make a judgment call on its quality. Worst, they assume the game is broken when there are dozen of positive reviews from users on its Steam store page. They can’t challenge their own view when everything points out they are wrong. They probably even don’t look for other people opinions to check if they have missed anything.

The result is that their “review” are worth less than the average user review, if you actually want to form your own opinion on the game.

Thus said, they are very unlikely professional reviewers (ie: they are probably not paid for that or just a little bit, they have another job or are just students), so in the end, it’s not that much surprising they’re only able to express their opinion and not get much objective work in their “review”. And in that light, they may likely actually reflect better what the average gamer might see when playing the game (the ones that still didn’t buy the game, coz the ones who did usually like it

It confirmed me that Dungeon Guardians is a game that can be hard to get into, and that it can be easy to pass through its major appeal. This is very important for me to understand the exact how and the why of this, and maybe it’ll be the topic for another post.

Meanwhile, have a nice Xmas, or anything else you may be celebrating or enjoying during this week..!

One thought on “Review of Reviews”