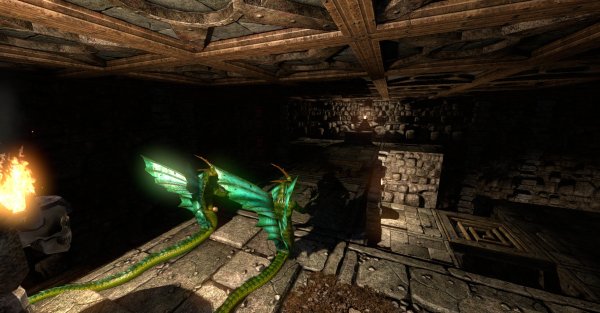 Basilisk roaming in the 18th Level

1stly, the Level 17 looks like a kind of fortress lost in the middle of abysses, which leads to unseen sceneries & exploration so far in the dungeon. The idea came to me from LoG2 : early in the game, you can see a castle with stairs on its side, in the middle, relying doors to the inside floors ; I thought it’d be impressive to walk on these stairs, going in & out like that in the middle of the castle ! But actually, they were just for the show, we never walk on these stairs, nor see them from close…

So in Dungeon Guardians, we will ! It’ll look a bit less good, because the gameplay actually handles them, they’re not just for show, but it should still be pretty impressive..!

The Level 17’s puzzle is mix of timed based & observation & trial/error puzzles. I really wonder if it’s too easy or not, hopefully I’ll get some feedback on it before the game release. But anyway, it should at least take a few minutes to solve, to take the time to observe everything, so it’s not too bad.

Due to the verticality of the level, I also hid plenty of “jumping” secrets, where you have to fall of the edge of the fortress to find an hidden entrance.

2ndly, the Level 18 is also a very particular level ! It’s a kind a labyrinth on 2 levels, which gives some great exploration, full of dark corners and surprises, with a bunch of teleporters to spice up the progression. Its puzzle is a teleporter maze, pretty similar to the one from Dungeon Master. I was not a big fan of it, but it brings some nice variation in the puzzle list ; I put plenty of visual indications to avoid feeling too lost & disoriented while in it, and it matches perfectly the theme of the level (labyrinth & teleporters!

I gave some thoughts for the Level 19 and I think I’ll go with a more classic approach : a kind of crypt with big rooms & corridors. After a bunch of really special levels, it should feel nice to get something more straightforward. For the Level 20, I still don’t have any clear idea : it’ll be the final level, so it should be special. I have a very special final boss fight in mind, so I should try to build up a level that matches it, but I’m not sure what it means right now.

So all next week will be spent on creating the last 2 levels of the Dungeon, and if things go fast, I’ll start to take care of the bosses of that final Tier.

Cu in 1 week for the next update !